CHARLOTTE, N.C. — A man with stage four brain cancer in Charlotte is trying to live his best life despite his condition.

Before COVID-19, Andi Elliott says he would play basketball at the Morrison YMCA in Charlotte just about every day.

“I have probably played 50,000 pickup basketball games in my life,” Elliott says. “I love basketball and have always loved basketball.”

But that all came to an abrupt stop when he was diagnosed with stage four brain cancer, known as glioblastoma. The cancer caused him to lose movement in the left part of his body and he had to use a cane to get around. It also meant he couldn’t throw a ball.

“It really hurt me because I liked basketball so much, but I couldn’t really play,” Elliott says.

Elliott’s oncologist, Dr. Justin Favaro, says the normal life expectancy for glioblastoma is 18 months to three years. But he said some can live past expectancy.

“You can take it lying down or you can try and fight it,” Favaro says. “Having that positive outlook and combining that with the right treatment, surprisingly a Mediterranean diet, and exercise, all help to fight the cancer.”

That’s exactly what Elliott started to do. He started physical therapy classes shortly after the diagnosis. His physical therapist with Architech Sports, Sydney O’Brien, says she had him do various sports for mobility like boxing and basketball.

“He has been working on coordination and balance,” O’Brien says. “He came in with a smile on his face, willing to work. He was willing to do what I gave him plus more.”

In addition to the physical therapy, Elliott tries to exercise at the Morrison YMCA every day.

“I try to do 2 miles of intervals where I walk for the first minute and then I increase the speed,” Elliott says.

That’s not all. He also lifts weights several times a week to improve his strength and stretches for flexibility. The workouts have allowed him to make great progress and it’s the reason he can play basketball now.

“I used to not be able to move my arm past here [his shoulder], and now I can do anything now,” Elliott says.

The workouts have allowed him to move his arm easily over his head. Elliott says he couldn’t have done it without his family at his side. His daughter quit her job in Florida to move back to Charlotte and spent time with him.

“I just feel like we have these constant scares where we lose hope, but then he proves us wrong every time,” Andy’s daughter Lauren Elliott says. “I have hope that he will live a long time with this because he is not giving up.”

Elliott says he also couldn’t have come this far without his wife, Dianne. The couple made a large donation to the YMCA. One of the fitness rooms was dedicated in their name. 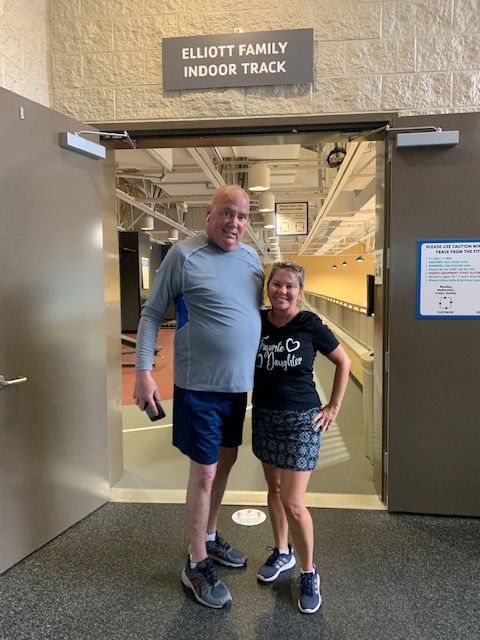 “I couldn’t do this without them,” Elliott says. “They are everything.”

His daughter says the last year has been tough, but she gave this advice to other family members going through the same thing.

Elliott says despite the challenges, he plans to keep fighting and playing basketball.

“I am going to fight this thing as long as I am allowed to and pray to God there is a cure someday,” Elliott says.

Elliott says he also wants to thank two employees at the Starbucks at the Stonecrest Shopping Center in Charlotte. He says they presented him with a card and $400 worth of gift cards and cash.

“I really appreciated that because I try to go to Starbucks every morning,” Elliott says. “That was so generous.”