According to media reports, Delhi police claimed to have registered an FIR against unnamed persons under section 124A (sedition), 153 (wantonly giving provocation with intent to cause riot), 153A (promoting enmity between different groups) and 120B (criminal conspiracy) of the Indian Penal Code (IPC). This followed a ‘toolkit’ having been uploaded and then deleted on Twitter by a Swedish environmental activist Greta Thunberg. However, in spite of Delhi police having talked about the FIR in the media, the FIR could not be located on the Delhi police website or on the website of E-Courts (official website of district courts), for unknown reasons.

Talking of defaming a country and waging social and cultural war

Media was told that the police wanted to investigate an ‘international conspiracy’ to ‘defame the country’. One officer also spoke of ‘waging social, cultural and economic war against India’.

Both statements, if true, are amusing. Defamation, by its very definition in section 499 IPC, applies to a person, a collection of persons, an association or a company. In G. Narasimhan & Ors. etc vs T. V. Chokkappa (1972), the Supreme Court had held that a collection of persons would be capable of being defamed only if it were a definite, identifiable and a determinate body so that the imputations in question could be said to relate to individual members or components. It was held, in the case of Asha Parekh and Ors. vs The State of Bihar and Ors (1975), for example, that advocates as a class could not be defamed.

In my opinion, the nation of India cannot be defamed. Defamation is different from creating disaffection or feelings of enmity against the government; and the latter is different from subverting the government by creating disorder or disturbance of public peace through violence, which is punishable under the constitution bench judgment in the celebrated case of Kedar Nath Singh. Thus, talking of ‘defaming the country’ by the toolkit does not have any value in law.

Section 121 IPC deals with waging, or attempting to wage war, or abetting waging of war, against the government of India. It means a military war. No one has ever heard of something called social or cultural war. This is plainly absurd. There is something called economic warfare but it is usually a part of military hostilities.

What is there in the said toolkit?

A toolkit is a document that explains some issue and contains a set of guidelines for addressing some issue. A document is available in the public domain, which is purportedly the toolkit in question. However, given the unavailability of the FIR, we do not know whether the Delhi police are referring to this very document or some other, undisclosed document. Given this limitation, I will limit my comments to the document available in the public domain.

This toolkit lists two sets of actions: urgent and prior. Prior actions speak of ‘digital strike’ also. It is not clear as to what they meant by it. Digital strike is not a standard scientific term. This word was seen used to lend an aura to the banning of the Chinese apps also.

Cyber warfare, on the other hand, is different. Presumably, only nations highly advanced in cyber technology can launch it. There is no reason to believe that even if there is a bunch of hackers associated with the creators and up-loaders of the toolkit, they could digitally disrupt a nation of our size, howsoever skilled they are. If they can, all the cyber agencies of this country have been wasting their time all these years. 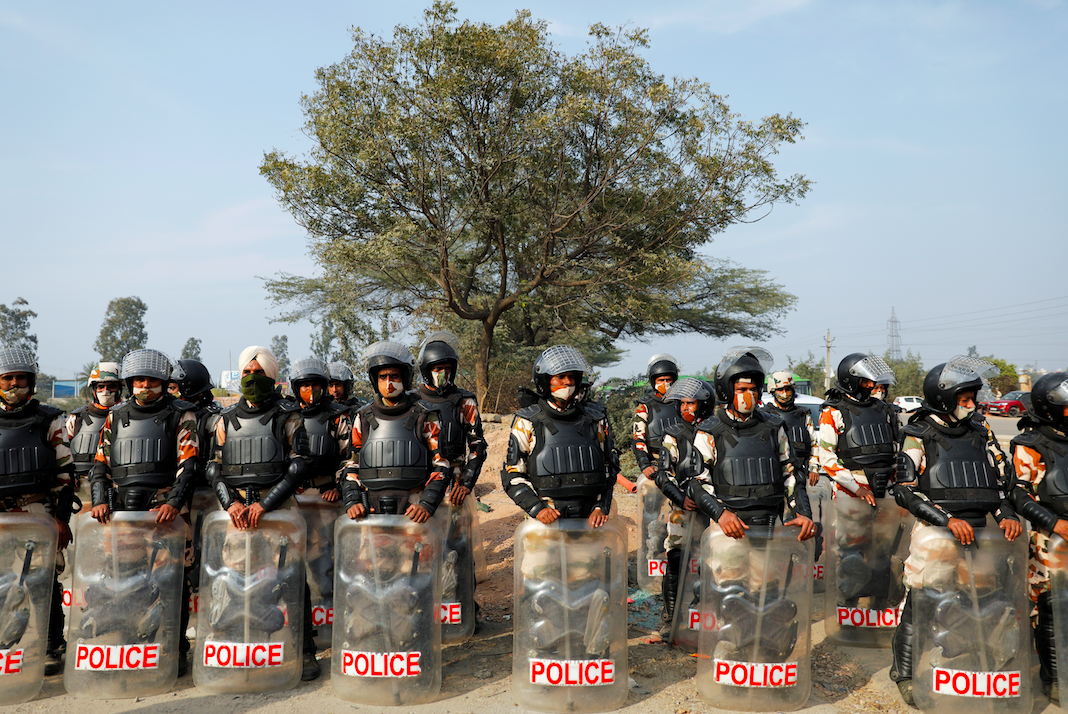 Police officers in riot gear stand guard at the site of a protest against the farm laws at Singhu border in New Delhi, India, January 30, 2021. Photo: Reuters/Adnan Abidi

The toolkit calls for mobilising opinion through social media, sharing solidarity photo/video messages, signing petitions and emails, etc. It also calls for a tweetstorm. This means a series of related tweets posted by a Twitter user in quick succession. None of them is an offence. Moreover, since it speaks of solidarity protests at or near Indian embassies, it suggests that the toolkit was designed primarily for foreigners or people living outside India.

As far as the January 26 farmers’ march is concerned, it calls to ‘watch out for or join it’. Given the fact that the rally was permitted by the police, it is no offence even if it were aimed at some Indian citizens.

There is no call to such violence, which would qualify for sedition in terms of Kedar Nath Singh.

The toolkit, therefore on its face value, does not contain anything, which could even remotely be linked to the sections used in the FIR. As far as the charge of criminal conspiracy is concerned, it must be kept in mind that expressing solidarity with something or giving advice for doing something is not synonymous with criminal conspiracy.

What can the Indian police do if offences against India are committed by foreigners on foreign soil?

For the sake of argument, even if we accept that there are ‘international conspirators’ who are out to ‘discredit India’, that is, project India in a bad light on international forums, the question is what we can do about it.

We can counter their propaganda by propaganda of our own or a reference in the UNO, but we cannot take legal action against them because they are beyond the reach of Indian law in the first place and secondly, because discrediting a nation is not an offence.

Media reports state that Delhi police have addressed Google seeking registration details and activity log of the account through which the ‘toolkit’ related to the farmers’ protest was created and uploaded on the social media platform.

Apparently, they are foreigners (even if they are persons of Indian origin like Mo Dhaliwal) and the server on which it was uploaded is located outside India. Had both been in India and, if the agencies like CERT-IN are worth anything, they should have been able to find them.

The Delhi police reportedly stated that they had identified some 300 accounts spreading dissatisfaction and disharmony towards the Government of India. Should the accounts be of Indians in India, they are free to act as per law on that.

However, if the police try to exceed their territorial jurisdiction and rope in foreigners as well, they would be making a fool of themselves.

The legal position pertaining to all the possible situations is discussed below.

Offences committed by foreigners outside India

In Fatma Bibi Ahmed Patel vs State of Gujarat & Anr (2008), the Supreme Court held that the very registration of a case against a non-Indian citizen for an offence committed outside India was illegal and without jurisdiction. Then the provisions of Section 4 Indian Penal Code and Section 188 Criminal Procedure Code have no application whatsoever.

Parliament does have powers to pass laws having extra-territorial operation. However, in the case of K. T. M. S. Abdul Cader v. Union of India (1977), a full bench of the Madras high court had held that such law would be ineffective so long as the foreigner remains outside India; he may be dealt with when he is found inside the country.

In Central Bank of India vs Ram Narain (1954), the Supreme Court had held that, after committing an offence in some country, if the accused acquired citizenship of another country, he could not be tried in that country retrospectively for offence committed in the previous country.

Sections 1(2) and 75 of the Information Technology Act, 2000 do grant extraterritorial jurisdiction to the police. However, as cyber law expert Pavan Duggal points out in his book ‘Cyberlaw: The Indian Perspective’, Pakistani hacker groups had hacked Indian government websites in 2001, when they defaced www.meadev.gov.in and www.indiagov.org. They had also hacked the websites of Bhabha Atomic Research Centre, AIIMS and Atomic Energy Research Board, etc.

However, realizing that it would be a futile exercise against foreigners, no cases were registered under Section 66 against the Pakistani hackers. In 2010, the CBI registered a case against unknown persons who identified themselves as ‘Pakistani cyber army’ for hacking and defacement of the CBI’s website. In 2017 also, they registered a case against a suspected Pakistani hacker who broke into the website of a Delhi University college. To my knowledge, these were all infructuous exercises without any success. 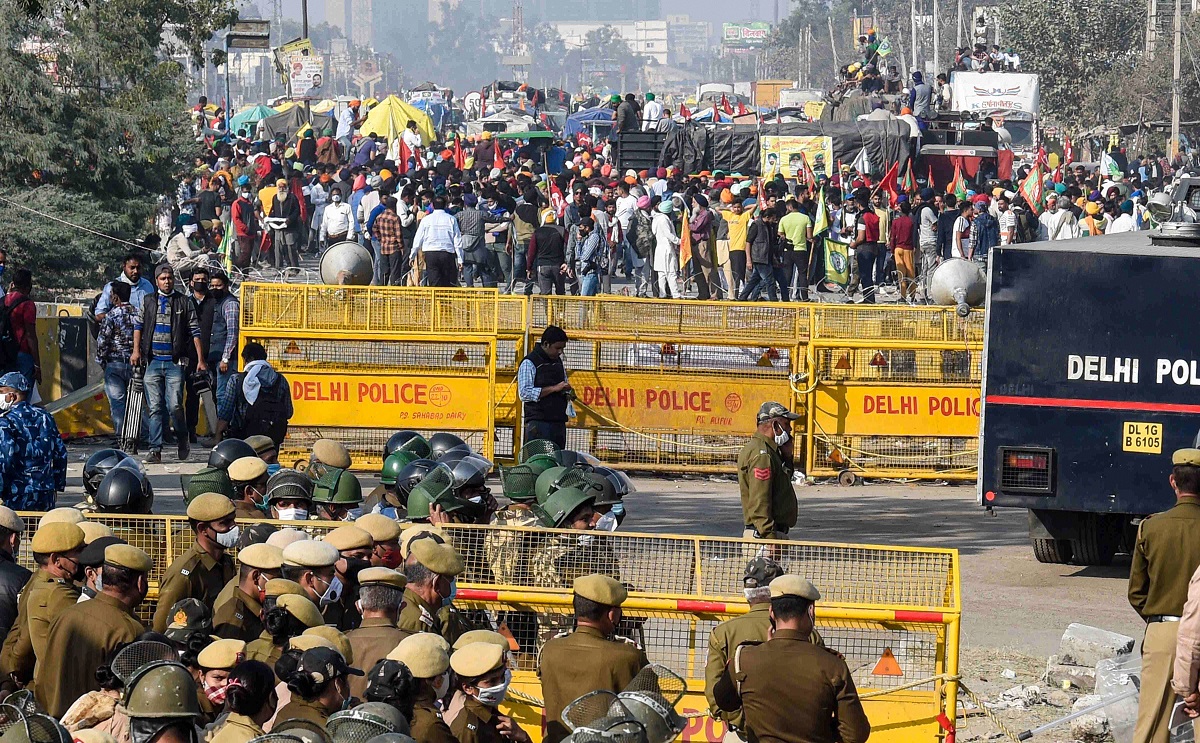 Police stand guard near a barricade as farmers protest at Singhu border during their ‘Delhi Chalo’ march against the Centre’s farm reform laws, in New Delhi, November 29, 2020. Photo: PTI/Atul Yadav

Prosecuting them was a practical proposition only in British India. In 1879, an Indian soldier in the British Indian army, committed a murder in Cyprus while deployed there. He was prosecuted in Agra. In Empress of India vs. Sarmukh Singh, it was held that he might be dealt with in respect of such offence as if it had been committed within British India.

Thus, if at all there are some Indian citizens amongst the so-called Khalistanis who were supposedly running the toolkit account, they have to be first brought to India before they can be tried.

In terms of the judgment in the case of Moulivie Ahmudoollah (1865), an Indian citizen, who commits an offence partly in India and partly within foreign territory, is liable to be tried by Indian courts.

It was held in the case of Emperor vs Chhotalal Babar (1912) that if a foreigner in a foreign country initiated an offence, which was completed within Indian territory, he would be – if found within Indian territory – liable to be tried by an Indian court. That is how Ajmal Kasab was tried in India for the 26/11 Mumbai attack, and we are demanding the masterminds in Pakistan to be handed over to us.

Nothing has come out of it, however. Extradition, in terms of the Extradition Act, 1962 can be sought either in terms of treaty or on reciprocal arrangement. There is, however, no regular method of enforcement of international treaties or obligations.

The charges in the Delhi police FIR would make sense only if they are able to find some Indian citizens who could be proved to have incited disaffection towards the government, etc. in a manner consistent with the Kedar Nath Singh judgment.

Proceeding against foreigners for a document uploaded on the internet would make us an international embarrassment. Abusing law in some misplaced bravado or in pandering to political expedience might be of some help in the domestic political scene; they would do great harm to the image of the nation abroad.

Let us not forget that, in spite of great outrage in the public and a nine-year-long legal battle, the government of India could not get even those Italian marines sentenced and convicted in India who had killed two Indian fishermen in 2012 – where does this count?

N.C. Asthana, a retired IPS officer, has been DGP Kerala and a long-time ADG CRPF and BSF. Views are personal. He tweets @NcAsthana.