THE Philippine Embassy in Washington is urging Filipinos in the United States to exercise “utmost caution” following the recent string of attacks on Asian Americans.

In its statement released on Thursday, February 26, the embassy noted “with concern the rise in attacks on Asian Americans,” particularly elderly individuals, in various parts of the country.

The embassy also called for further protection of the Asian American community.

“The Philippine Embassy and Consulates General in the United States appreciate the swift action taken by a number of local authorities to apprehend perpetrators of these attacks,” it said.

“However, we call on federal, state, and local authorities to further ensure the protection of persons of Asian descent, including Filipinos,” the embassy added.

The National Council of Asian Pacific Americans (NCAPA) is among a handful of Asian American organizations that have called for immediate action to end violence against the community.

“We call upon our country’s leaders to make good on their past commitments to fight anti-Asian racism. Both President Biden’s Administration and Congress have condemned this racism in the past, but it has become clear that more action is necessary,” NCAPA said.

Earlier this month, a Filipino American man had to receive almost 100 stitches after he was slashed across the face by another passenger on the New York City subway.

Noel Quintana, 61, was riding the L train to get to work in Harlem on February 3 when a man walked by and kicked the tote bag that Quintana had set on the train floor. 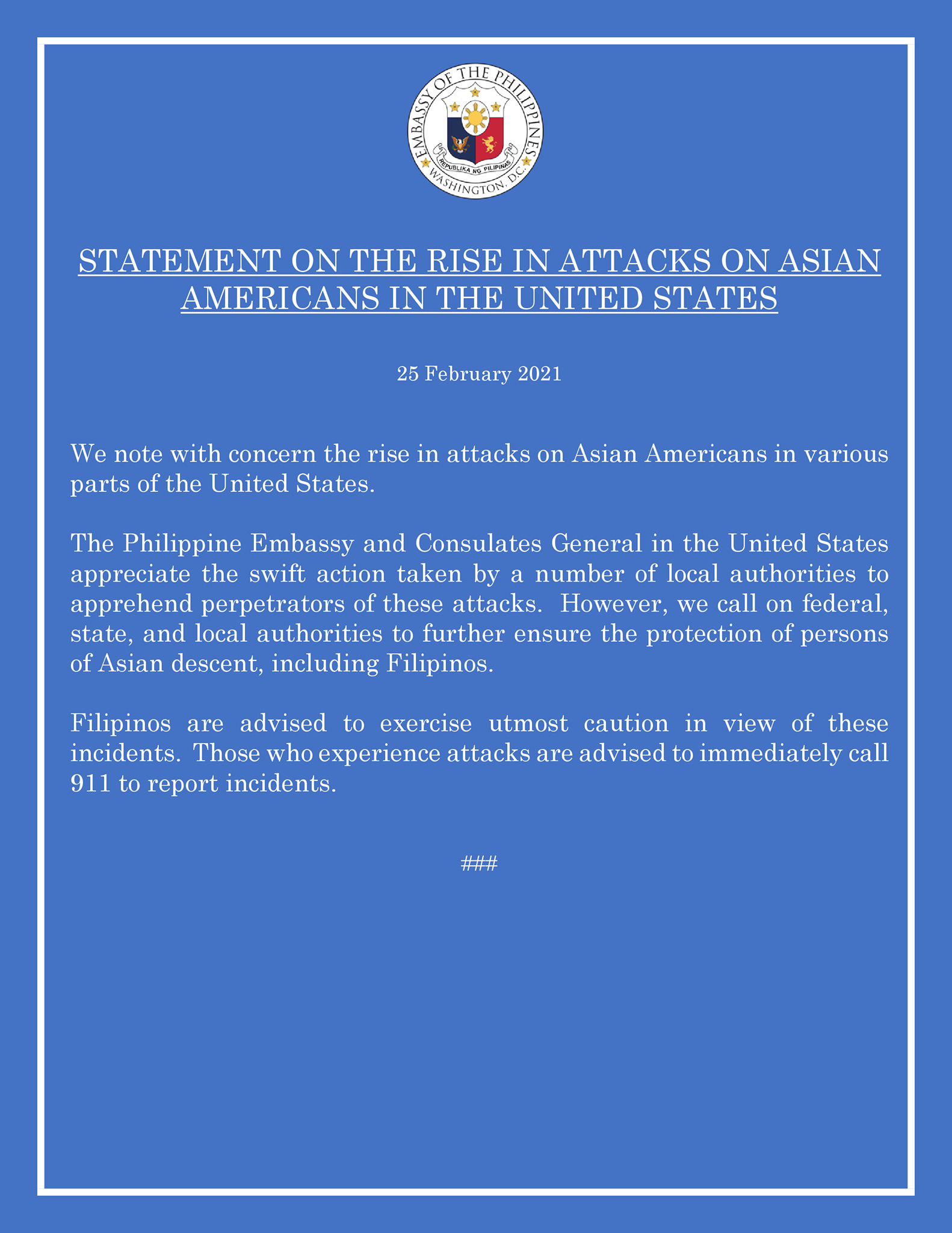 When Quintana confronted the man after he noticed his bag being kicked again, the man took out a box cutter and slashed Quintana across the face from cheek to cheek. Quintana was taken to Bellevue Hospital for treatment.

An elderly Filipina was also the victim of a random attack in San Diego, California, as previously reported by the Asian Journal.

The Pinay senior citizen, who has not been identified, was riding a trolley when a man, unprovoked, started punching her, sources told ABC 10News.

The station said witnesses helped the victim report the attack to the police. She was later treated at a local hospital for her injuries. The suspect was later arrested, and faces one count of assault with a deadly weapon and elder abuse.

The tracking center allows individuals to report in English as well as several Asian languages like Tagalog. The website also features safety tips for those who experience or witness hate.